Love This? Try This! – “Romeo and Juliet” Graphic Novel

It’s been a hot minute since I did one of these! But then again, it’s also been a while since I read something that so strongly reflected its predecessors or inspirations. I mentioned in a previous post that I’ve read another graphic novel by Gareth Hinds while teaching Homer’s The Odyssey; similarly, I know I have to teach Shakespeare’s Romeo and Juliet this year (*eye roll*), so I got Hinds’ graphic novel version to see if I can find a way to incorporate it. 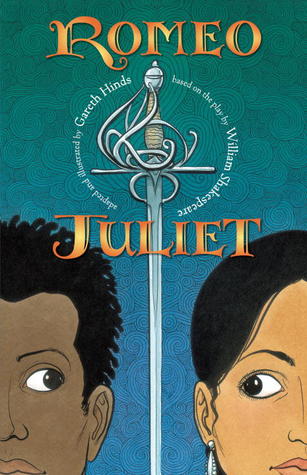 She’s a Capulet. He’s a Montague. But when Romeo and Juliet first meet, they don’t know they’re from rival families — and when they find out, they don’t care. Their love is honest and raw and all-consuming. But it’s also dangerous. How much will they have to sacrifice before they can be together? In a masterful adaptation faithful to Shakespeare’s original text, Gareth Hinds transports readers to the sun-washed streets and market squares of Shakespeare’s Verona, vividly bringing the classic play to life on the printed page.

First things first, if you love the classic tale of literature’s most famous star-crossed lovers, this adaptation does the original story justice. The language remains the same, so you’re not getting a “cheat sheet,” per se; however, in this format, you have the visual advantage of being able to see the characters and conversations, see who is speaking and to whom they are speaking. I really can’t say enough about having visuals, especially for stories that have elevated language that might confuse current-day readers. Having that visual assistance can only aid in understanding the plot.

Another advantage (in my opinion) of this format is that the content must be condensed so, thankfully, many of the pointless, rambling monologues are cut out entirely or reduced to only the parts that drive the story. To me, those moments where the Nurse would go off on a tangent never added to the story and instead only added to the level of student confusion. I’m thrilled that those are omitted and, honestly, wish I could teach with this graphic novel as the primary text. This adaptation includes everything that is pivotal to understanding the plot and social references. For those who are only reading this out of obligation and not by choice, this version would serve just as well as the original.

The most obvious difference between this graphic novel and the classic play is that the character families are portrayed as minority groups; the Capulets are Indian and the Montagues are Black. Hinds makes it clear that the choice to portray them as such is not pointed in regards to either culture and simply exists in order to show that the story is “universal” in its popularity and influence. Whether it was the goal or not, portraying the families in this way also makes it easier to determine which characters are Capulets vs. Montagues. Instead of just having a bunch of white people fighting and not knowing whose side each is on, for better or for worse, the difference in ethnicity helps readers understand sides. However, potentially also unknowingly, this gives the impression that the family feuds could relate to cultural differences, when such is not likely to be true in the original play.

My mission is to find a way to incorporate this graphic novel into our reading of the classic play as much as possible. If you remember my efforts with The Odyssey and Nimona, I have faced trouble with giving students access to the text. However, those attempts were at a school that did not have one-to-one capabilities, which I will have this year, so it is possible to give students access to an electronic copy. I’m going to go with that and see where it takes me.

In addition to the graphic novel, there are numerous film adaptations of the play. I was kindly gifted a copy of Luhrmann’s “Romeo + Juliet,” featuring my boyfriend Leo. There are also other versions, like “Romeo Must Die,” “Gnomeo and Juliet,” and “West Side Story.” I also have several songs that would be great for lyric analysis in regards to this play. I’m excited to teach it, in spite of the fact that Juliet and Romeo are as irritating as the day is long.

Reviewing the fourth book in a series is difficult. Although the events that take place in James S. A. Corey’s Cibola Burn, book 4 in the Expanse series, are remarkably different from what happened in Leviathan Wakes, Caliban’s War, and Abaddon’s Gate, summarizing how they differ from one another to someone who hasn’t read the series is hard to do without revealing spoilers. It involves dancing around details in book one that hugely shaped book two; things that are major spoilers for book one (identifying the villain, character deaths or changes, evolving relationships) are yesterday’s news in book two, so discussing books two and up without spoiling book one becomes more and more difficult. That’s why I didn’t even bother reviewing Abaddon’s Gate; the review was going to be the same “it’s about space; also, I loved it” as the reviews for the previous two volumes. To me, each book is remarkable, unique, familiar, and original, but to others I can see that the reviews start to look like reruns of the same ol’, same ol’.

I just finished book four in the Expanse series, and I am still as in love as always. I also just found out that the sixth book will be released this summer and there are expected to be up to nine volumes in the series! PRAISE IT! I adore these characters. They are my family. Anyway, I’ll let Goodreads do the boring work of the synopsis, and then we’ll get to the good stuff:

The gates have opened the way to thousands of habitable planets, and the land rush has begun. Settlers stream out from humanity’s home planets in a vast, poorly controlled flood, landing on a new world. Among them, the Rocinante, haunted by the vast, posthuman network of the protomolecule as they investigate what destroyed the great intergalactic society that built the gates and the protomolecule.

But Holden and his crew must also contend with the growing tensions between the settlers and the company which owns the official claim to the planet. Both sides will stop at nothing to defend what’s theirs, but soon a terrible disease strikes and only Holden – with help from the ghostly Detective Miller – can find the cure.

Okay, since I had such a fun time creating the Toon Teasers for the Stiefvater novels and since the reception of them was so kind, I decided to do a Toon Teaser for Cibola Burn, in lieu of another, similar review. Behold:

Let me tell you what you’re seeing here. 1. The inhabitants of Earth, Mars, the Belt, and the other colonies in the galaxy are facing the potential of inhabiting hitherto unexplored planets and solar systems, and the race to colonize mineral-rich planets has begun. 2. Tensions rise when the rights to lay claim to one new planet, Ilus or New Terra, is questioned, and James Holden and the crew of the Rocinante are assigned as impartial mediators until a decision about ownership is reached. 3. However, the unfamiliar flora and fauna prove hostile, an unidentifiable disease renders everyone vulnerable, and a massive storm threatens to wipe out all of New Terra’s inhabitants, regardless of which side they support. Can they set aside their differences long enough to survive? Read it and see.

Now, the other good news is that Sci-Fi has a new show based on the books! It’s called, what else, “The Expanse” and the Sci-Fi channel website has the first 4 episodes available, so you should check it out if you’re interested in the books. I WILL SAY, however, that Brice and I are both just as surprised by watching the show as you will be, because it is taking a lot of artistic license and some details vary widely. That’s fine by me, but if you want the full story, the books contain so much more than the show ever could, so read the books, friends! Here is the trailer for the show. SO GOOD!