Re-reading Things Because I Must: “Jekyll & Hyde”

I went back and looked; I wrote four papers with four different arguments on The Strange Case of Dr. Jekyll and Mr. Hyde. I think my attraction to Gothic literature meant I was already inclined to like the story, but I also assume that dissecting it in order to argue those various points forced a familiarity with the text that borders on friendship.

When I realized I would be teaching it this year, I immediately began wondering what overall “unit idea” I could apply to J&H so that I could start planning supplementary texts. “Gothic lit” was an obvious choice, but so what? Like with the Brutality unit, I wanted an idea that would matter on a larger scale; thus, this unit became the Unreliable Narrator unit. As always, the goal is not only that students learn from and analyze the text in ways that prepare them for tests and cultural references (after all, J&H has been adapted over 100 times), but I also want to ensure that students find larger meaning that applies to their lives and places within society. It was easier to lead them to find relevance with the brutality unit, but I had to work harder with the Unreliable Narrator unit.

Like with the Brutality unit, I had one mandatory primary text, but could weave in assorted secondary short stories. We started with Truman Capote’s “Miriam,” but they read it on their own time and had to include annotations. The intention was that they annotate on the first reading, postulating on what will happen and then after they read the big surprise ending, go back and re-read, annotating again, but this time noting the moments that foreshadow or reveal who or what Miriam is. We finished that work with a Socratic Seminar, which lead to some awesome conversations from the class. At the end, I asked what made the narrator unreliable, if anything. Unanimously, the students agreed that they weren’t sure what it was, but something about Mrs. Miller that isn’t quite right or trustworthy. Mental Illness of some sort was the ultimate popular vote.

We read Edgar Allan Poe’s “The Cask of Amontillado” in class. This one was difficult for them. The language is old and elevated, so we listened to an audio version (alleviating the risk of round-robin mispronunciations or listening to my man voice the whole time) and I frequently paused it in order to deconstruct some of the more confusing moments. This just reminded me that my love for Poe is not universal and maybe (definitely) it would be beneficial to spend a day going through Poe’s language, giving examples and having them break them down into current translations, as is often beneficial with Shakespeare. I think if we had been able to lessen the intensity of the language, they would have liked it way more. In order to impress upon them how much perspective changes the story, I had the class complete a worksheet that would analyze how certain moments would change if told from Fortunato’s perspective instead of Montresor’s. This actually ended up being more difficult for this 9th Honors group than I had thought it would be, but I think that could be alleviated with more practice within more works.

They all agreed that Montresor was unreliable since he showed clear bias, was blinded by revenge, and might also be mentally unstable. Perf. That’s when I hit them with Charlotte Perkins Gilman’s “The Yellow Wallpaper.” I didn’t have hard copies and I didn’t want to murder a million trees, so we utilized ActivelyLearn.com. This was my first time using this website and I really liked it. They offer a lot of the classics for free and you just set up a class, import some notes, links, and questions (some works come with them already), and assign it. They read at their own pace, answering questions as they went along, and I was able to see all their answers, give feedback, or prompt them to think harder and re-answer, as well as grade quickly and easily.

Everybody felt strongly about this text, but in what way varied. Some didn’t understand it and were frustrated by it. Some appreciated the articles and questions about women’s roles that I embedded, and were similarly frustrated. Others loved the evident downward spiral of the narrator’s sanity and enjoyed it thoroughly. I enjoyed being able to track their understanding of the narrator’s reliability through their answers to my questions. Some read the story at face value, believing the claims that the room was a nursery, despite the fleeting mentions of bars on the windows, rings in the walls, and the bed being nailed to the floor. That’s fine. We never truly know otherwise. But through discussion, they were able to identify why the narrator’s assumptions might not be reliable and what the other evidence might imply.

The unreliability of Gilman’s narrator was obvious. But what about J&H? Mr. Utterson narrates a large portion of the tale and his mental capacity is never called into question. However, when I opened this question to the class, they pointed out that the point of view meant that the events were being delivered from an outsider’s perspective. We only know what Utterson knows about Jekyll and Hyde, so we see it as he sees it. Some information is missing due to that simple fact. These kids are so smart.

Ultimately, I got to the end of the unit and asked, “ok, so what? Why talk about this? How does your understanding of the narrator affect the overall story?”

I was stared at for a very pregnant pause (something I’m learning to allow, since it benefits no one for me to ask a question and then answer it myself since they’re taking too long). Eventually, students began to propose answers to the question: some suggested that they read these works in order to better understand others’ perspectives; another postulated that I wanted them to consider how a person’s experiences may affect his or her point of view and, thus, the story; ultimately, I finished by encouraging them to question everything, taking in all the details from all the perspectives in order to form their own educated opinions. Each of these overall lessons shows me that these students finished the unit more thoughtful and understanding than they began it. In and of itself, that is a tremendous success. Yes, they can pass the tests. Yes, they’ll understand that calling someone “Mr. Hyde” is a literary insult. Yes, they’ll identify the good side vs. evil side trope in popular culture. But they’ll also, hopefully, think for themselves and do their research before just believing something they’re told. It’s an all-around success.

Filed under Lindsay, Not A Book Review, Teacher Stuff

Re-reading Things Because I Must: “Lord of the Flies”

Many years ago, not long after Hannah and I started this blog, I ruminated on how the simple task of assigning a text to a high school student pretty much guarantees that said student will HATE said book, not because it is particularly hatable, but because it is mandatory. Interestingly enough, I wrote this long before I decided to become a teacher, so not only do I now think I have some level of prophetic ability, but 40+ hours a week, I’m just swimming in the relevancy of that statement.

Everything I got to teach this year, I had read previously. See my Re-Read or Not post to review my feelings on this. We started the semester talking about To Kill a Mockingbird, which was as heavy as ever. We then moved on to Lord of the Flies, a text about which I blogged and faithful readers might recall that it ended with the statement, “I’ll never pick it up again.” PSYCH! I did pick it up again, but only because I had to do so in order to make sure that when my students had questions, I was able to answer them. When my students didn’t understand the text, I was able to explain it. When they didn’t see the point in reading it, I was able to prompt them to think about it another way. 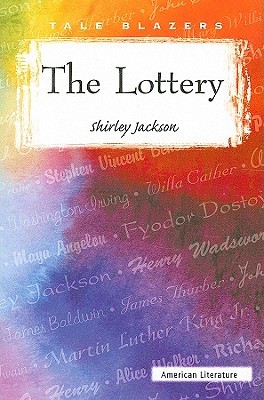 I’ll go ahead and say that I still do not like this book. Most of the kids did not like it, either. HOWEVER, through teaching it with a central theme and alongside supplementary texts, I truly do see why it is still relevant to be read by young readers. Students started the unit reflecting on the prompt, “all humans have the capacity for brutality.” They placed themselves on a Story Spectrum based on where they fell between totally agree and totally disagree. 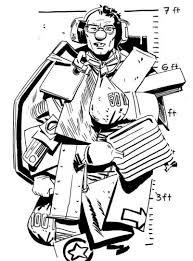 While reading LotF outside of class, we read “The Lottery,” “Harrison Bergeron,” and an article about the Stanford Prison Experiment in class.
Each time we finished one, they moved their name on the Spectrum to match how/whether their opinions on the prompt had changed. As you can see, there was a massive amount of movement and progression of thought, and I’m THRILLED with the amount of meaning that the students extracted from the unit. 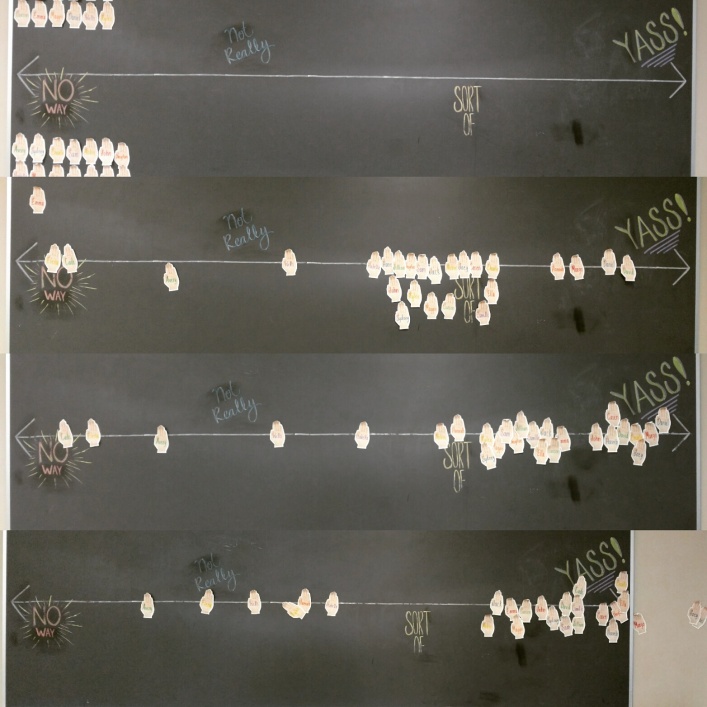 The final project for this unit was for students to get into groups and record a podcast where they discussed their progressions of opinion. These podcasts were some of the most profound discussions I’ve ever had the pleasure to hear. I’m honored to have been a part of those insights.

I’ve completed two other units this semester, both of which had primary texts that I had to re-read, as well as supplementary texts that I added to the unit in order to enhance an overall central theme. I’ll work on posts for these units in the next few days, because I’M ON SPRING BREAK!!! I’ve also recently been addicted to a book, so I need to spew about that, and I also completed a book that was on my New Year’s Recommendations post. Plus, we’ve graciously been nominated for a few awards, so I need to get to those. Hopefully, lots to come, folks!